One of the best known and most appreciated Italian National Parks 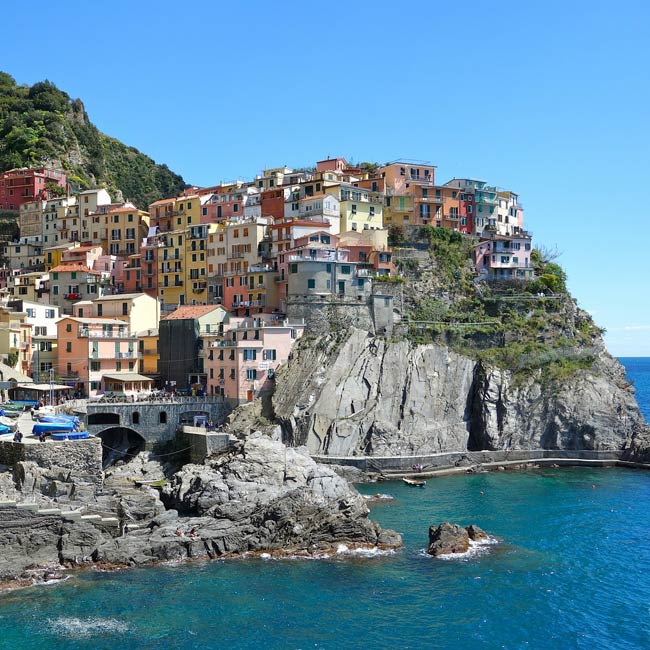 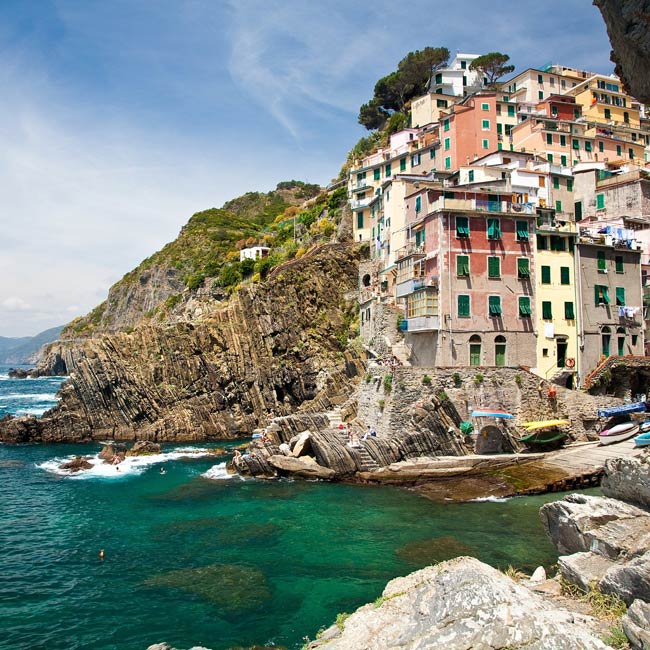 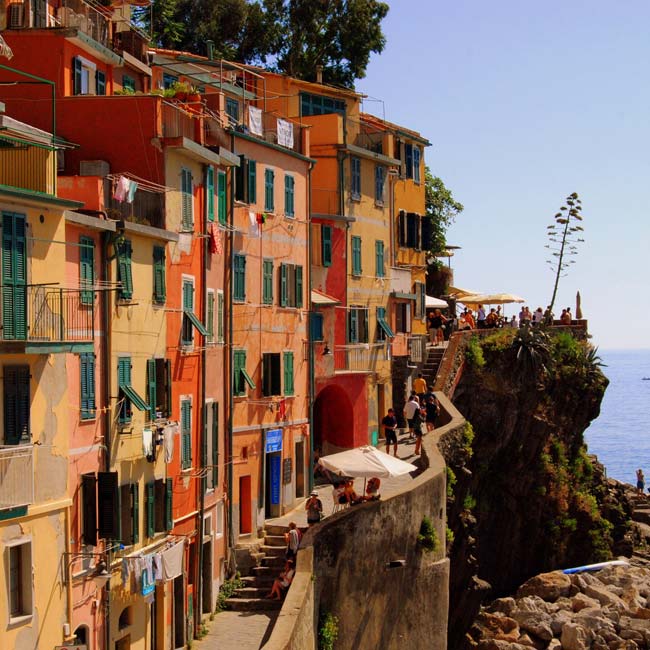 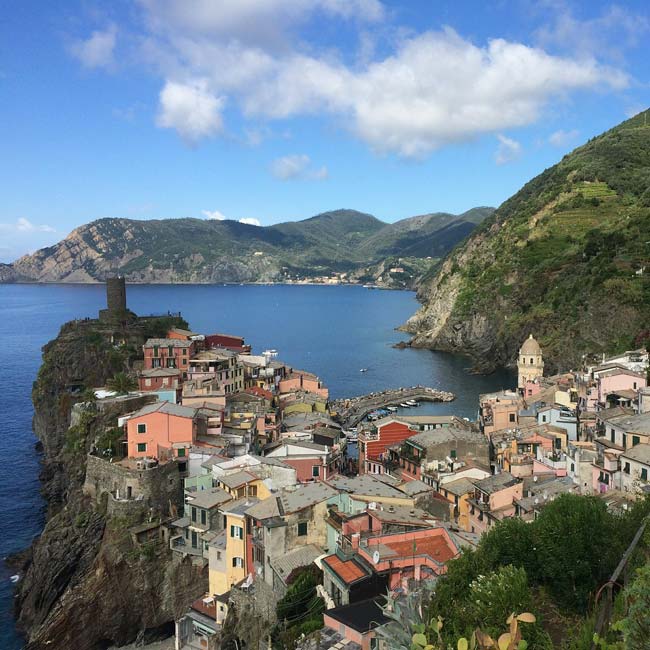 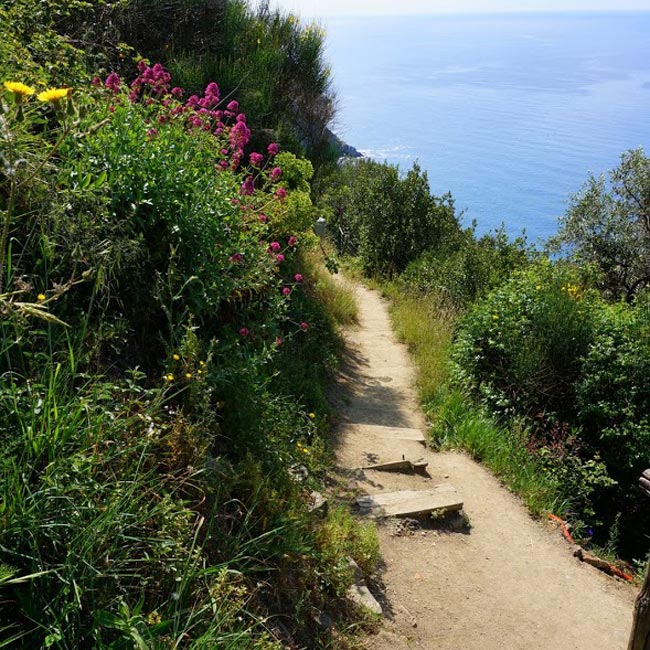 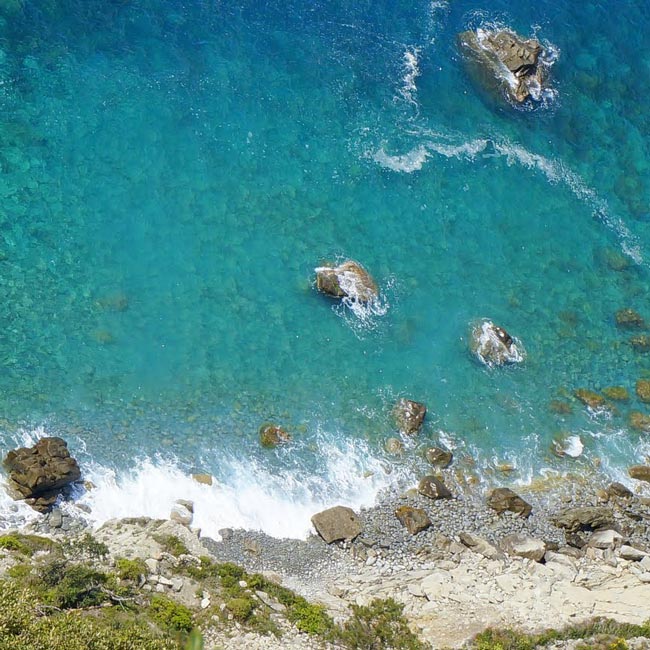 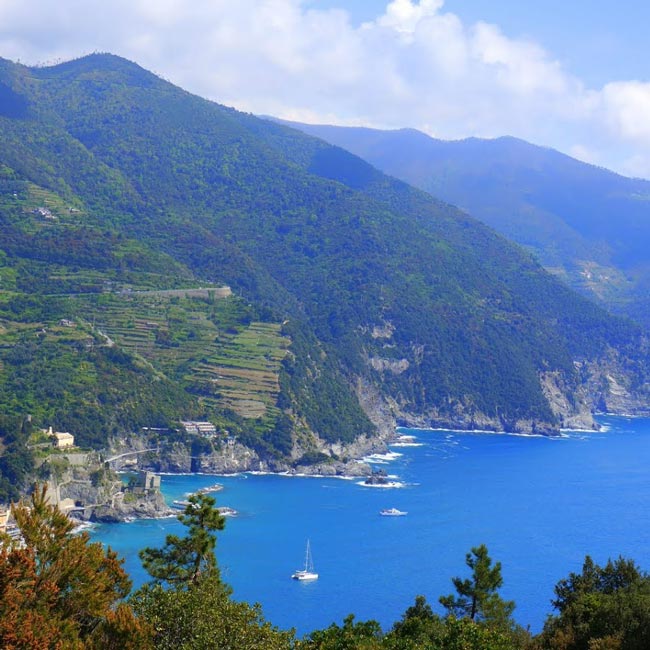 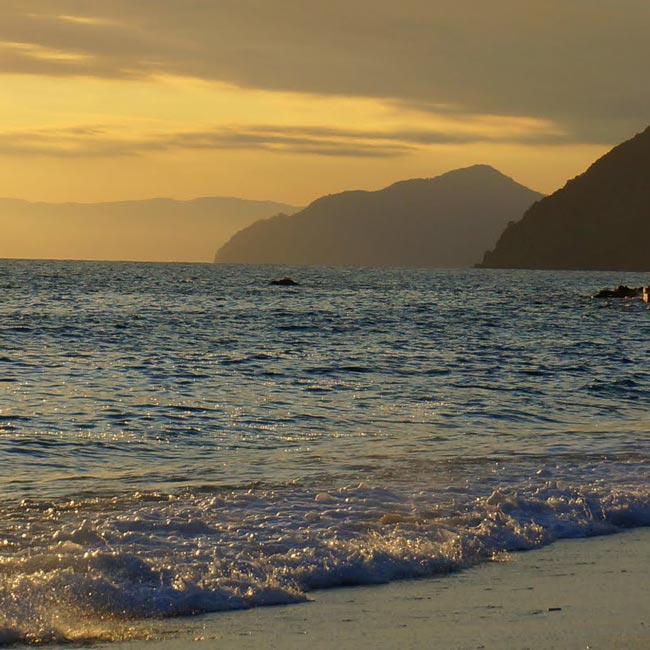 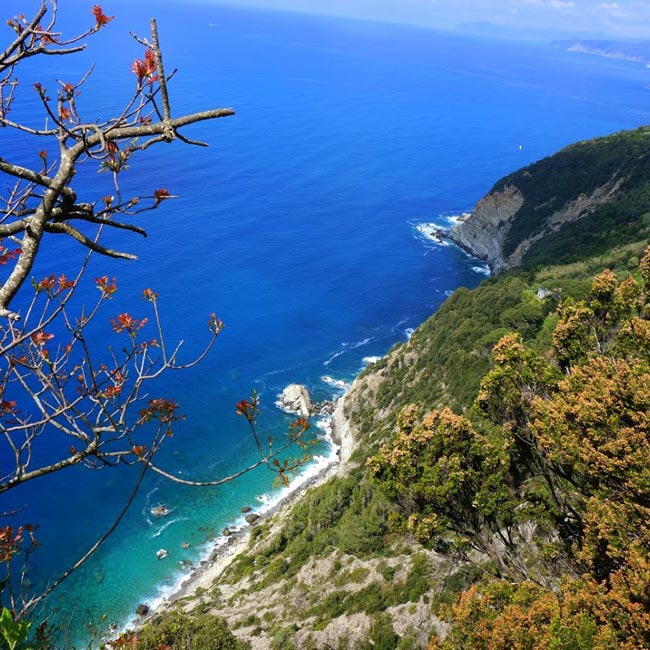 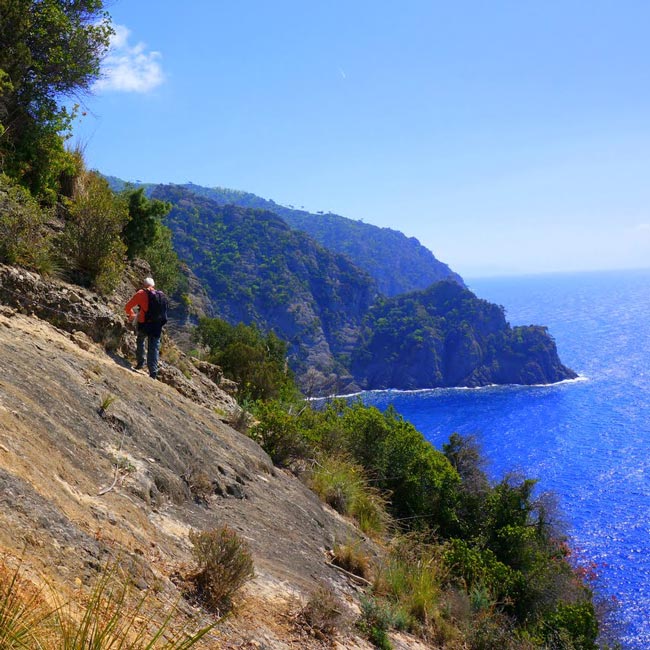 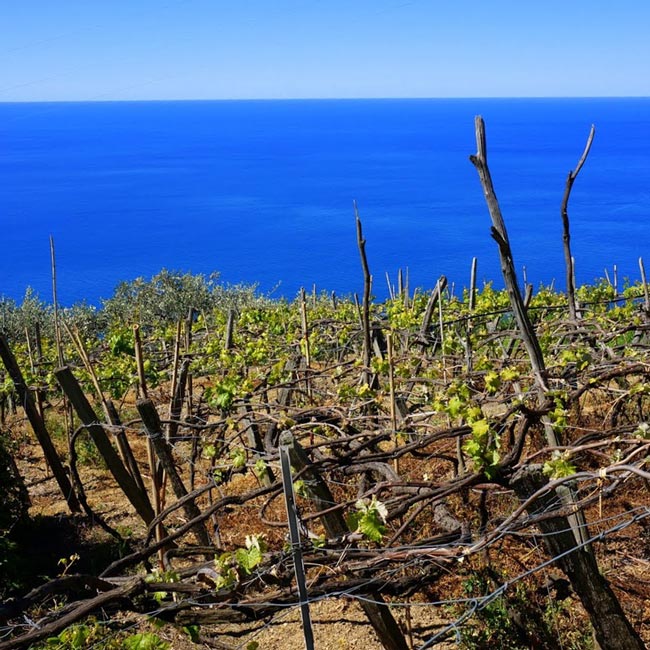 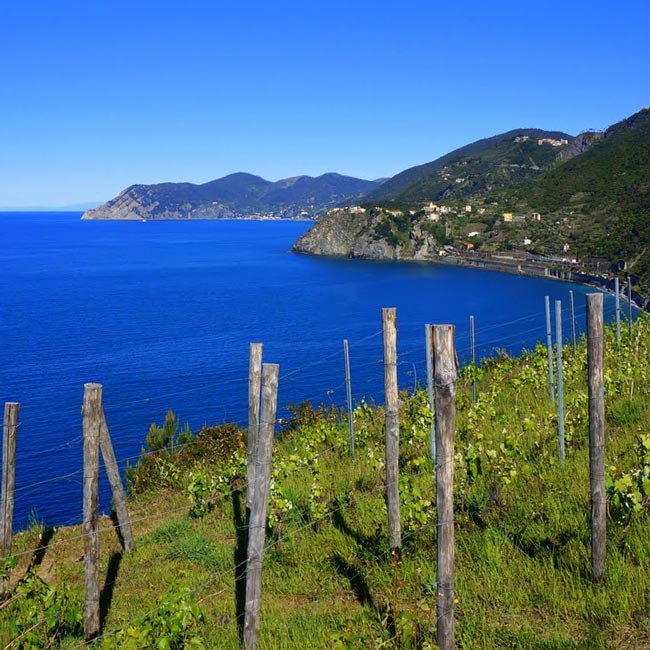 Built along the stream Rio Maior, now covered, Riomaggiore presents itself like two lines of coloured houses closed around the marina and surrounded by the cliffs.

Coming from the sea, you can see it only at the end, remembering us the times when these coastlines were lashed by pirates, and visibility could be a risk for the inhabitants.

Houses form a very particular landscape, often represented by the painter Telemaco Signorini, who lived in this town.
In Riomaggiore you can visit the ancient Torre Guardiola, an old defensive complex now transformed in the Environment Educational Centre of the National Park of Cinque Terre, where you can admire the natural-environmental treasures of this particular area.

Founded by the inhabitants of the neighbouring Volastra, Manarola owes its name probably to Manium Arula, a temple dedicated to the souls of the dead erected here by the Romans.
Its Structure, with the houses gathered on a rocky point daring gravity, makes it very suggestive.
Equipped with a small exposed to the winds harbour, during the storms boats are recovered along the roads, creating a characteristic and colourful landscape.
Worth a visit is the parish church dedicated to the nativity of Saint Mary (known also as San Lorenzo), dating back to the 14th Century.

Manarola has become famous for some years also for a particular shining crib with the outline of more than 300 characters built with iron frameworks and thousands of bulbs built on the hill overlooking the town.

Built on a about 100 Metres high rocky terrace, Corniglia is the only town in Cinque Terre without a direct access to the sea.
From the railway station, located near the sea, to reach the town you need to climb a steep staircase of 377 steps, called “Lardarina” or to use one of the buses of the National Park of Cinque Terre.
Its calling is more rural than maritime, in fact it is known for the wine production.
Its ancient name, “Cornelia”, was found written on some amphorae discovered in Pompeii excavations.
The church of San Pietro, whose rose window has the image of a deer, the coat of arms of the town, dates back to the 13th Century.
Near the church you can see a building with arches in black stone: the tradition determines it like the ancient post stage of the Fieschi Family, once Lords of the area. 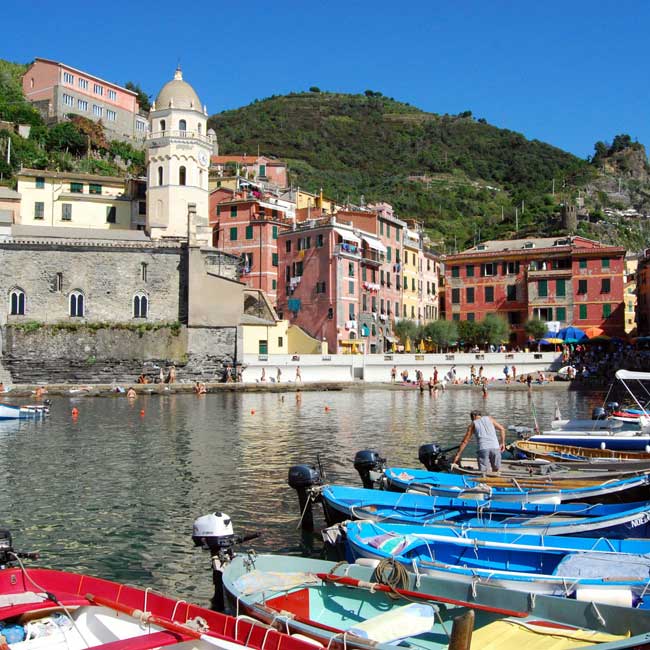 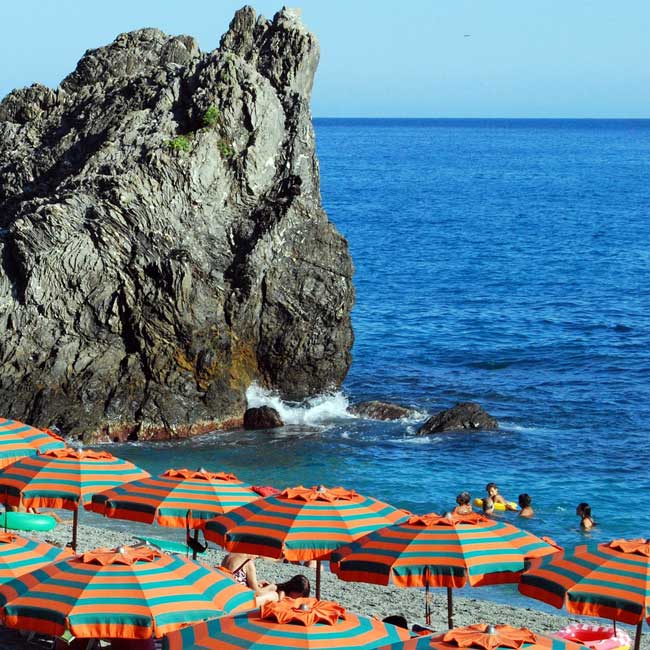 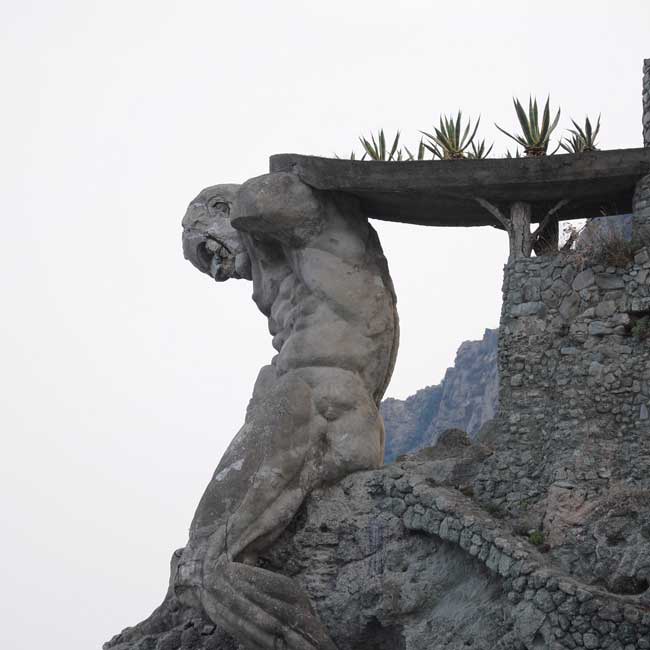 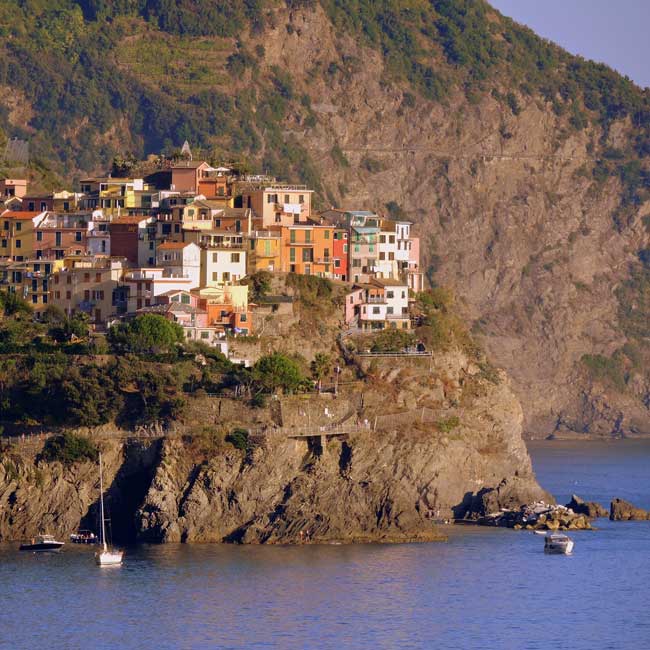 The only harbour of Cinque Terre, Vernazza boasts very ancient origins.
From here you could see in ancient times the boats with the famous Cinque Terre wines leaving.
Genoa used its small bay to recover the boats, and gave to the village an imposing defensive structure, whose remains are the Doria tower, nowadays a very nice spot, and the castle.
The village is built along the river Vernazzola, now covered, crossed by small roads called “carruggi” and staircases called “arpaie”.
The church of Vernazza, dedicated to Santa Margherita di Antiochia, is one of the most suggestive of Cinque Terre.
Built in 1318, with a particular octagonal bell-tower, it seems to emerge from the water.

Set along two bays, Monterosso is the most “tourist” in the Cinque Terre.
Thanks to the less wild territory the towns boasts a good hotel capacity and a nice sandy beach.
Founded in the 9th Century by the inhabitants of Albareto, the hinterland town destroyed by the Longobards, Monterosso had its name probably from the red hair colour of its first rulers, the Obertenghi Marquis.
From the Middle Ages Monterosso was under the influence of Genoa; several monuments built by the men of the Republic, like the Aurora Tower and the Church of San Giovanni Battista, ended in 1307, with its marble rose-window and the white-black gothic façade are still present to show this.
At the top of the hill dividing the two hamlets of the town, Monterosso and Fegina, the Capuchin monastery stands, and we highly recommend to stop and admire the Neptune statue (informally called “the Giant”), dating back to the first years of the 20th Century and the remains of a terrace of an ancient villa. Monterosso is also famous because the Nobel Prize and Poet Eugenio Montale spent here his summer holidays. 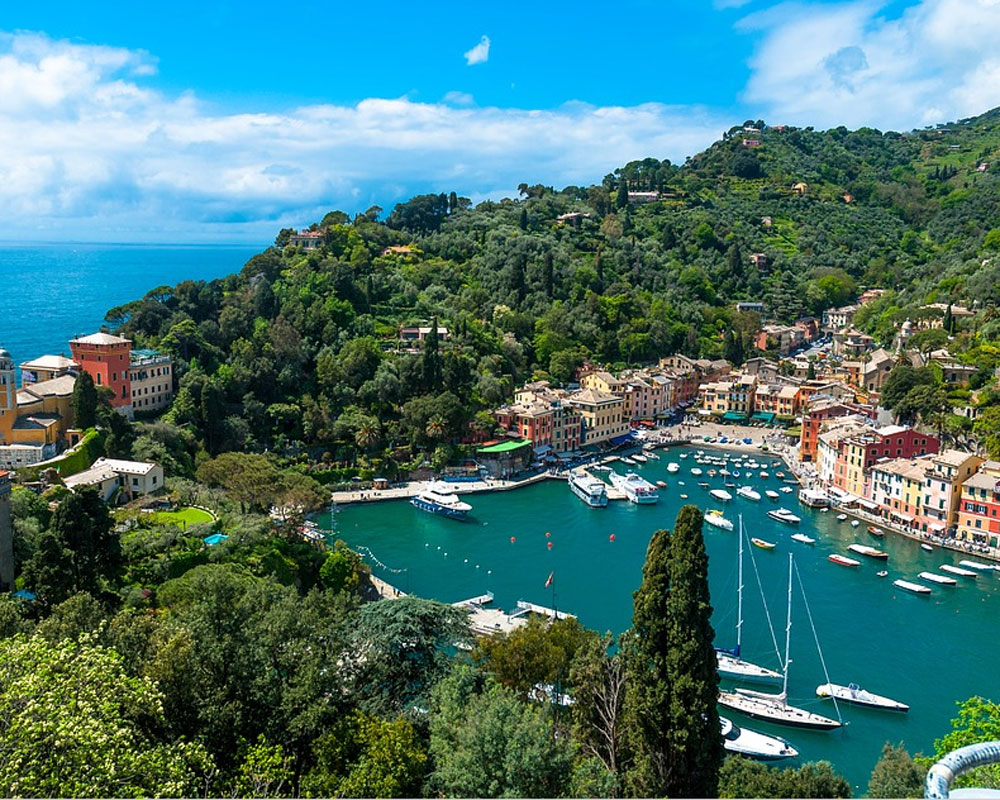 Portofino and Gulf of Tigullio 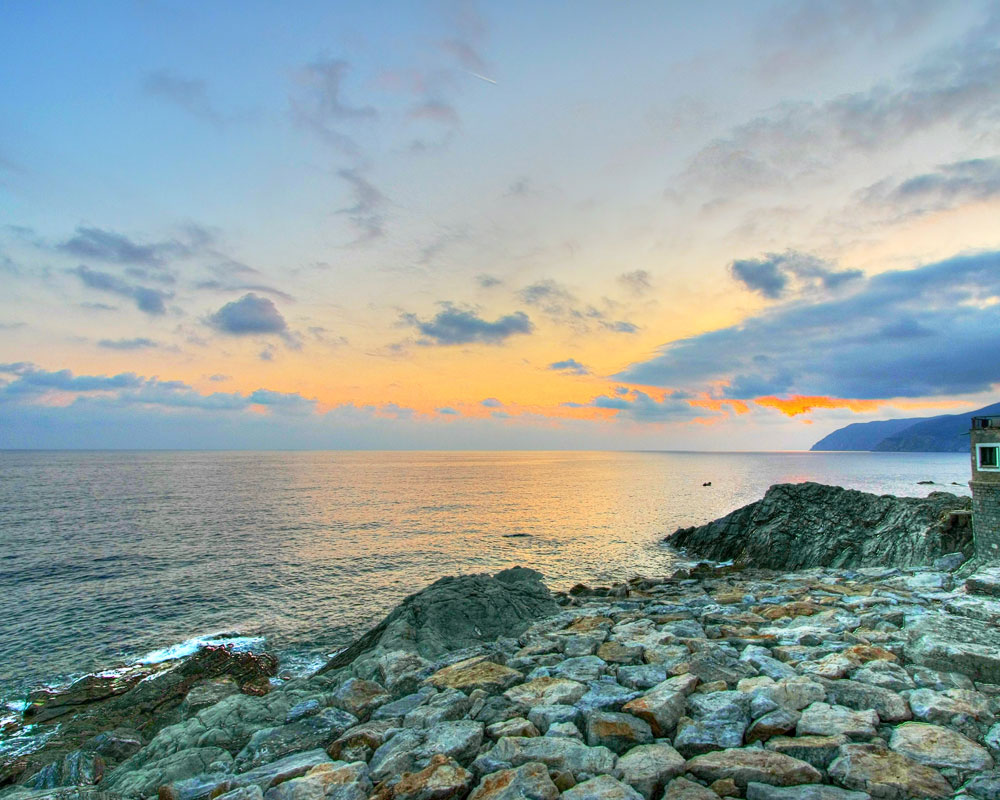